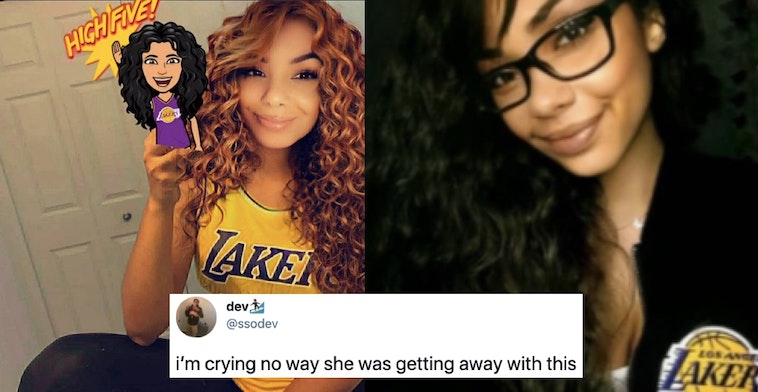 Is there anything better than bizarre drama in a niche world? NBA Twitter isn’t exactly niche, but its people seem to know each other. That’s why the story of Vivian Flores aka @Butterfly_424 is taking over the timeline today.

Flores was minimally famous for being a huge Lakers fan and podcasting about the team with another Lakers fan named Josh Toussaint. On Sunday, Toussaint posted that Flores had gone missing… and the whirlwind began.

In his post, Toussaint gave a description of Flores, saying she has just gone through leukemia treatment and might be wearing a wig. BroBible reports that she was well-known enough that some minor celebrities boosted Toussaint’s message, like Ice Cube’s son O’Shea Jackson Jr.

But then on Monday night, Toussaint claimed Flores was found. Happy ending, right? Nope. It was just the beginning.

Twitter user @ItsKingsBruh revealed during a Twitter Spaces session that he had started an online relationship with Flores, but they broke up shortly before her brief disappearance.

He explained that he broke up with her because he was beginning to think Vivian Flores was a catfish.

After this revelation, everything started pouring out. Flores returned to Twitter and started denying that she was catfishing anybody and the most popular claim: that Josh Toussaint had made her up entirely just to have a co-host on his podcast.

Some people thought her use of punctuation and emojis were very similar to Toussaint’s, according to BroBible:

But she refused to get on a Livestream and prove her identity. The next person to come in with a denial was Toussaint, who basically said he’d been taken in just like everyone else.

He tried to show proof that he believed Flores was real, that she had “family” who contacted him, and that she had excuses for never meeting over video:

As this came out people started going through her old photos, noticing how ridiculously Photoshopped many of them appeared to be:

And then, a New York City DJ named Chumzilla claimed he recognized Flores from over a decade ago when she’d tried to catfish him with a different name. She also apparently used to do what she’s doing now on “Raiders Twitter.” She’s got no loyalty!

We don’t know if Flores is a figment of Toussaint’s imagination, but it’s pretty clear she’s not who she says she is. And probably doesn’t exist. Go Lakers! 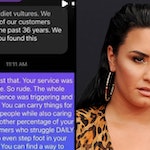 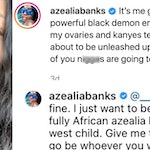