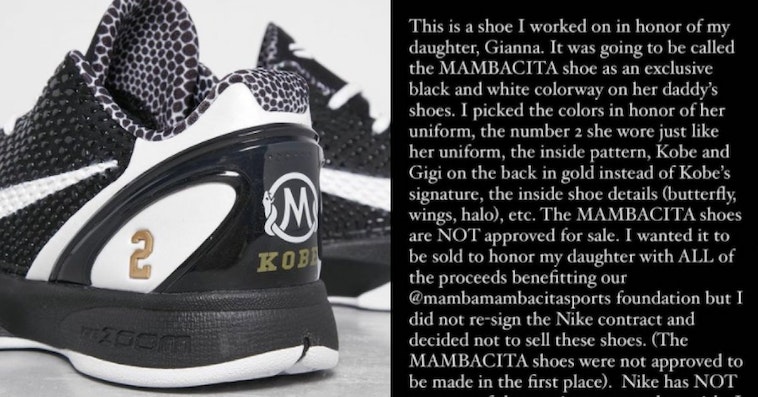 Vanessa Bryant took to Instagram with a picture of a shoe and a story about Nike violating their shoe-making agreement. On Wednesday, Bryant wrote that she helped design the sneaker with her late 13-year-old daughter Gianna’s life in mind. Gianna died in a helicopter accident with her father Kobe Bryant in January of 2020.

“This is a shoe I worked on in honor of my daughter, Gianna,” Vanessa wrote. “It was going to be called the MAMBACITA shoe as an exclusive black and white colorway on her daddy’s shoes. I picked the colors in honor of her uniform, the number 2 she wore just like her uniform, the inside pattern, Kobe and Gigi on the back in gold instead of Kobe’s signature, the inside shoe details (butterfly, wings, halo), etc.”

E! News reports that Bryant had stated in April that Kobe’s estate had chosen not to renew their contract with Nike.

“The MAMBACITA shoes are NOT approved for sale,” she continued. “I wanted it to be sold to honor my daughter with ALL of the proceeds benefitting our @mambamambacitasports foundation but I did not re-sign the Nike contract to sell these shoes. (The MAMBACITA shoes were not approved to be made in the first place.) Nike has NOT sent any of these pairs to me and my girls.”

The caption of the post refers to her second photo, of someone appearing to be holding the shoe that shouldn’t be for sale.

An Instagram user named brandon1an also posted pictures of the shoes three weeks ago, and TMZ reports they gave a statement about how they got them, blaming Nike for the leak.

“I just want to make it clear that I don’t own a pair of those Mambacita Kobes,” they said. “The pictures I posted are official product pictures from a Nike authorized retailer. Unfortunately for [Vanessa Bryant], Nike clearly sent pairs to this retailer (as well as others) with the intent of selling pairs.” 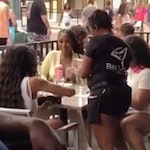 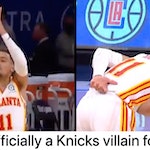