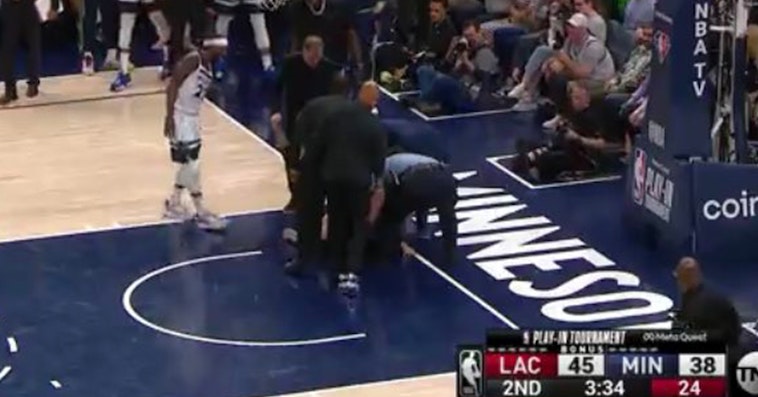 Of all the topics to be trending following Tuesday’s NBA Play-In Tournament, activist Alicia Santurio, a.k.a. Glue Girl, was not one anyone expected.

Santurio is now infamous for running onto the basketball court during the Los Angeles Clippers v. Minnesota Timberwolves game as the second quarter was coming to a close and trying to superglue her hand to the baseline.

The broadcast of the game on TNT wasn’t initially able to capture the event as it unfolded, as both basketball players and security guards had surrounded Santurio, trying to figure out if she was having a medical emergency. Sports announcers Reggie Miller and Kevin Harlan were also unsure of the situation until Allie LaForce, the sideline reporter, explained what had happened.

LaForce informed her colleagues that Santurio was, in fact, attempting to superglue her hand to the court in an attempt to protest an Iowa farm’s practices.

Glue Girl was refusing to leave the court, trying to give the glue time to set in, and eventually, security was forced to step in and physically remove her from the basketball court, leaving behind her very visible glue handprint.

“The only thing crazier than gluing your hand to a basketball court in the middle of an NBA playoff game is thinking you can do it with some basic arts and craft white glue,” tweeted Will Brinson of CBS Sports.

Matt Johnson of the animal rights group Direct Action Everywhere sat down with Santurio to talk about why she was trying to glue herself to the basketball court.

Johnson tweeted with the nearly-11 minute broadcast, “Hanging out with the #GlueGirl AKA @aliciasanturio! Why did she superglue herself to the court at tonight’s NBA playoff game?”

She wore a t-shirt that read, “Glen Taylor Roasts Animals Alive.” Santurio told viewers that she was raising awareness about the investigation being done by Direct Action Everywhere into the Iowa farm owned by the Timberwolves owner, where there is currently a wave of avian flu going through the farm. According to Santurio, this is the second time the farm has had an outbreak of avian flu, the last time being 2015.

The broadcast has been viewed over 16.4k times since posting on April 13.

What would normally be a small news blip and then forgotten will certainly leave an impact, as the sportscasters joked about Glue Girl’s protest.

“Kevin Harlan casually taking shots at glue lady ‘she was sniffing the glue!’ 😂😂”

The game eventually continued, and the Timberwolves beat out the Clippers by a narrow 109-104 score. They are placed as the seventh seed in the NBA playoffs this year. 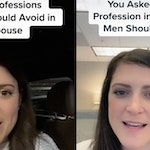 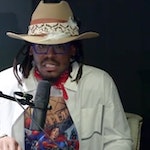