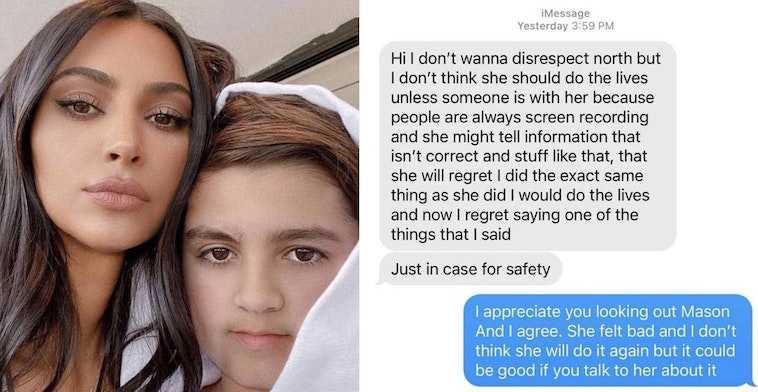 Kim Kardashian and Kanye West‘s kids are growing up and getting their hands on technology. Kris Jenner has been micromanaging her crew of kids for years but now has a whole bunch of grandbabies who refuse to be managed.

Recently, eight-year-old North West went live on the TikTok account she shares with her mom. In the brief clip, North runs around her home before surprising Kim in bed, who jumps up annoyed to see her daughter streaming without permission.

“No! Stop, you’re not allowed to,” says Kim, asking someone off screen, “Come on, is she really live?”

The pair seems to have made up while the camera was off, and started posting normally again. And then Kim addressed it on her own Instagram account by sharing screenshots of some texts she received from her nephew Mason Disick, son to Kourtney Kardashian and Scott Disick.

In the last few years, Mason also grew into managing his social media presence. He had a few episodes of going live on Instagram and spoiling a rumor about Kylie Jenner and Travis Scott’s that would have been a plotline on Keeping Up With the Kardashians. He stole the moment!

Mason seems to have learned his lesson.

“Hi I don’t wanna disrespect north but I don’t think she should do the lives unless someone is with her because people are always screen recording and she might tell information that isn’t correct and stuff like that, that she will regret,” Mason texted Kim. “I did the exact same thing as she did. I would do the lives and now I regret saying one of the things that I said.”

Kim agreed with him, replying, “I appreciate you looking out Mason. And I agree. She felt bad and I don’t think she will do it again but it could be good if you talk to her about it.”

He agreed he would the next time he came over. Kim shared the convo, calling Mason a mature “helpful king!” 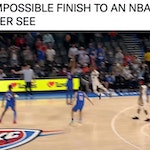 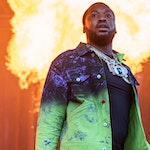