On Wednesday, Brooklyn Nets point guard Kyrie Irving posted on Instagram about wanting a big change on the NBA logo. Right now, the logo features a silhouette of player Jerry West. Irving’s post shared a mock-up of the NBA logo with Lakers star Kobe Bryant, who died in a tragic accident last year.

Irving’s perspective isn’t just about honoring Bryant’s memory, it’s about the number of Black NBA players who have been making the league what it is. Jerry West was a white man.

The current logo was created in 1969 by Alan Siegel. The new mock-up was created by designer Tyson Beck close to Bryant’s death, according to Complex, and has been discussed frequently over the past year. There was even a petition circulating to change the logo and it got over 3.2 million signatures, so Irving is not an outlier in his opinion.

Rachel Nichols, host of ESPN’s The Jump, tweeted that when Jerry West appeared on her show, he said he’d be fine with being replaced.

Vanessa Bryant shared the mock-up on her Instagram stories, tagging Irving and writing, “Love this.”

Any big change usually leads to controversy, and there are a lot of people in the comments wondering why Michael Jordan isn’t in the running for the honor, considering his influence on the sport.

Fans and colleagues seem to be supportive of Bryant’s likeness taking up that space on the NBA logo, and they may end up having the influence to change it. 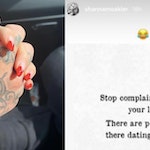 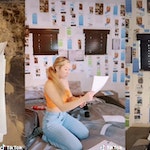