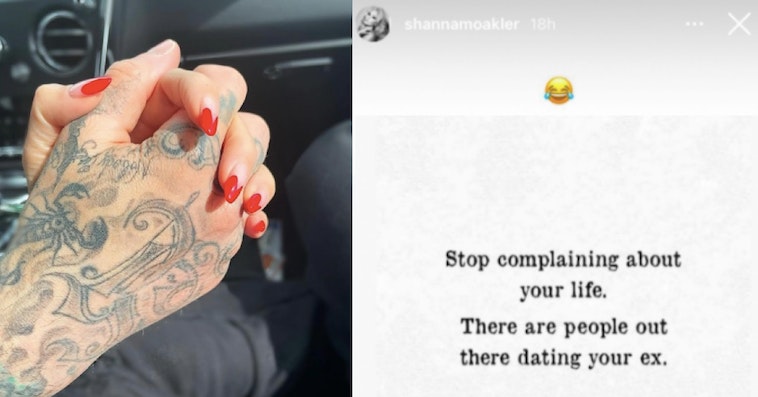 Kourtney Kardashian has apparently been friends with musician Travis Barker for about 15 years, and people have been suggesting that they’re more than friends recently. Nothing is real until it’s Instagram official, though.

Kourtney finally ended the attempted secrecy and posted a photo of their clasped hands, hers perfectly manicured and his featuring the easily identifiable tattoos Barker is known for.

Good for the happy couple. And good for Travis Barker, because this is the next photo Kourtney posted:

Yowza. Could this be a strike in the brewing war between Kourtney and Barker’s ex-wife, Shanna Moakler? BuzzFeed reports everything was chill until Shanna liked a comment on an Instagram dissing Kourtney.

“Shhhhiiiii that broad don’t got nothin’ on you,” it read. “Travis downgraded big time.”

And Shanna liked it, though she eventually deleted it. That doesn’t seem like too big a deal, just someone liking a complimentary comment after finding out their ex is with an incredibly hot and famous woman. The two have teen kids together, and supposedly get along, but it’s not easy when stuff changes.

But it quickly escalated. On Tuesday, Shanna shared a post to her Insta stories that reads, “Stop complaining about your life. There are people out there dating your ex.”

There are a few crying laughing and winking emojis on there, to lighten things up.

On Kourtney’s side, it’s a bit more ambiguous how invested she is in continuing beef. She posted this picture, with the phrase “Stop social media stalking your ex” written across it, linking it to an article on her lifestyle website, Poosh, with actual advice.

Is that a dig at Shanna? Or just about the perennial toxic habit of social media stalking?

Offline, Shanna doesn’t seem to have an issue.

“He’s my friend and co-parent, and I want him to be happy,” she told paparazzi in LA. “If being with her makes him happy, and she’s happy, I’m happy for both of them, honestly.”

But she added, “He can handle that Kardashian drama.” 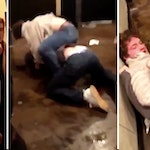