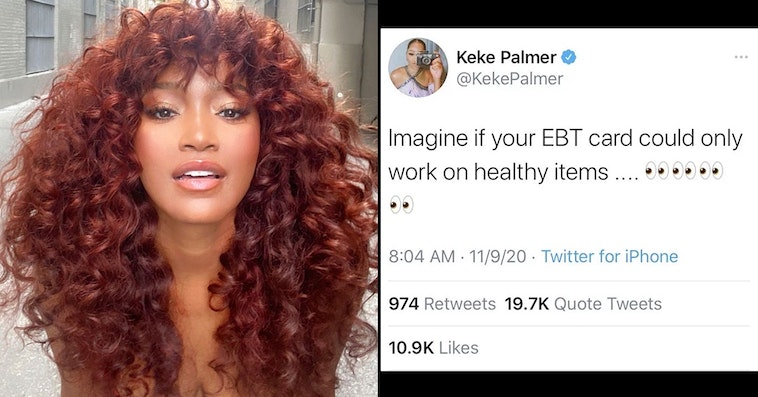 Keke Palmer has found herself at the center of a scandal over a remark about food stamps this week, and has since gone into full damage control mode. On Monday, the actress, singer, and television personality tweeted, “Imagine if your EBT card could only work on healthy items,” adding a few sets of eyeballs emojis.

Electronic benefit transfer (EBT), otherwise known as food stamps, or SNAP, is a government-run program that assists low-income individuals in purchasing food and other groceries. The average payout for EBT participants is around $125 per month.

After the tweet quickly became ratio’d Palmer deleted it. But not before plenty of people jumped into the fray to shame the Scream Queens star for what was evidently a classist remark and conservative talking point. “Imagine hating poor people this much,” one person quipped.

Others pointed out reasons why her tweet was problematic. Healthy food is often difficult to find in low-income, inner city areas due to so-called “food deserts,” though either way, no one—especially not a wealthy celebrity—should be policing how poor people eat. Others pointed out that if people were paid a living wage, perhaps they wouldn’t need to rely on food stamps.

Palmer later walked back her tweet, explaining that she was intending to make a statement about healthy food being too expensive for most people on government assistance. Though people seemed overall unconvinced.

She also took to Instagram to offer a longer statement, claiming that she’s noticed a dent in her own bank account since she recently took up healthy eating.

“Healthy food is more expensive for a reason. It’s fresh, good for you, and gives you energy. Bad foods are bad for a reason,” Palmer wrote. “They last long they taste good because of tons of sodium and they aren’t expensive because they’re honestly not food. Most likely they are food-LIKE products.”

She added that, in a perfect world, healthy foods would “swipe for free” on an individual’s EBT card as an incentive for healthy eating. Hey, with Trump effectively voted out of office—who actually at one point wanted to replace food stamps with food boxes—maybe President-elect Joe Biden can work something out! 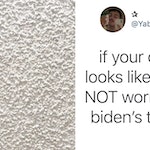 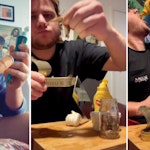