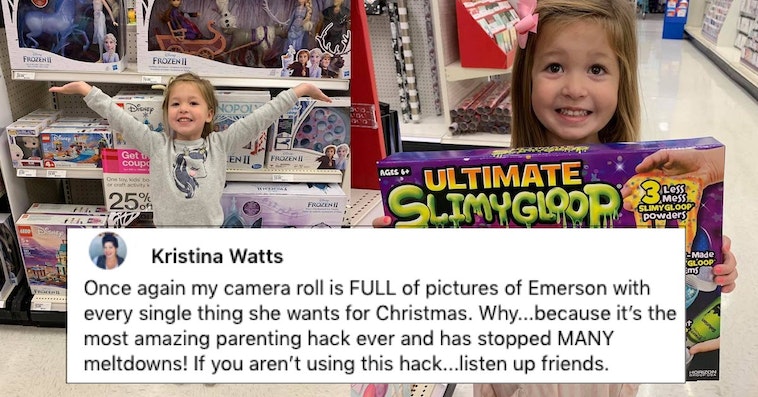 A mom named Kristina Watts is wowing parents with a hack that actually seems to work. Children have famously bad impulse control: when they see something they want, they want it NOW. This can lead to a lot of arguments at the store, especially in the toy aisle. Watts figured out how to side steps any meltdowns, and she posted her innovation on Facebook.

“Once again my camera roll is FULL of pictures of Emerson with every single thing she wants for Christmas,” wrote Watts. “Our trips to the store used to be a lot more painful this time of year. Toys are out in full force…and of course my kids WANT

ALL. Obviously I would love to have sweet, well-mannered, non-greedy, chill kids, that don’t ask for all the things…but I don’t.”

“So drop your judgement Karen, and stop reading if you have kids like that. Now…if you have kids like mine…that want the shiny amazing things that fill Target, the grocery store, Office Depot, the gas station, and pretty much everywhere you go this time of year, this is for you.What is it?! Take a picture. It’s that simple.”

“Pause for a second, comment on the thing they’re pointing out, and say, ‘Let’s take a picture with it and send it to Santa so he knows you want it!'”

Watts adds hat this is the perfect way to let family members what the kid wants, because you can just forward the photo. But acknowledging what her daughter wants seems to work almost a well as getting it for her.

“Magically, Emmie smiles, says cheese, asks to see the picture, then PUTS THE TOY DOWN AND WALKS AWAY,” she concludes. “It’s magical. No tears. No tantrums (by either of us). And she forgets about all of them within minutes.”

Incredible. A lot of people in the comments claimed that they do this exact thing. If they didn’t before, they might now—the post has been shared over 79 thousand times and it’s the holiday season. Of course, for everyone who loves the idea, there are people claiming you should just tell your kids no:

In an interview with Bored Panda, Watts says that the criticism isn’t getting to her. She knows her kids hear “no” a lot. She uses this hack to make her daughter feel heard.

“Like you’re listening to them and getting excited with them,” she explained. “I’m not promising Emmie all of these toys, nor does she get them all. It’s just hope and joy. It’s the modern-day version of circling all the toys in the JC Penney catalog. We never thought we’d get it all, but it’s fun to dream and feel like your parents are looking.”

Smiles over tears always seems like the better choice to me. 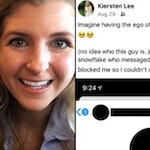 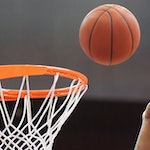