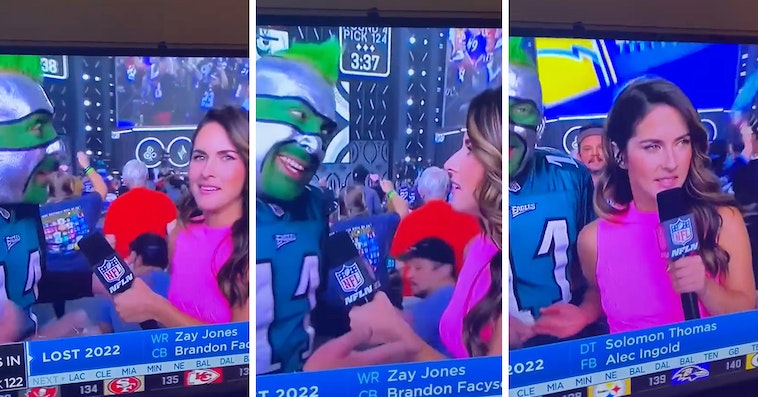 During the NFL draft last week in Las Vegas, one Eagles superfan was decked out in silver and green face paint and feeling his oats.

In a video that has gone viral on Twitter, sports news reporter Rachel Bonnetta walked up to the fan, named Jamie, to ask him who he was most excited to see for the draft, and got a response that she was not expecting, and very clearly made the reporter uncomfortable.

“You know, the fans have been amazing, the draft picks have been great, but I’ve been waiting all this time to see you,” Jamie told Bonnetta.

She glared awkwardly at the camera the second the words left his mouth and said, “Wow, take that,” handing him some cash and backing away quickly.

The video has been viewed more than 2.6 million times, with over 3k retweets and 29.7k likes, and people’s reactions to Jamie’s mere seconds of screen time have been hilarious.

One user took a screenshot of the reporter’s uncomfortable facial expression saying, “My grandma when nobody is looking.”

In a brief conversation, one Twitter user asked, “She’s talking to an Eagles fan. Did she really expect a different response?” to which another replied, “She was shocked when an Eagles fan could form a complete sentence.”

Many on Twitter are questioning what the money she slipped him was for, positing that they thought the come-on was a bit and she was paying him to say it, which—given how immediately uncomfortable she looked—is highly unlikely. 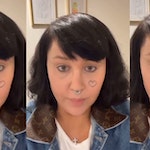 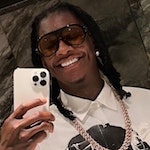