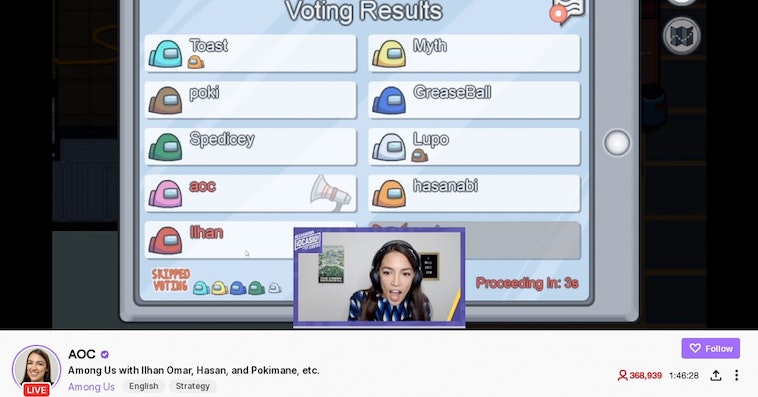 Alexandria Ocasio-Cortez made history on Tuesday night, in more ways than one, by participating in a game of Among Us on the video game streaming platform Twitch. Also known by her initials AOC, the New York state representative faced off against her Democratic colleague Ilhan Omar, who represents Minnesota’s 5th congressional district, to encourage people to get out and vote.

The two congresswomen were joined by prominent Twitch personalities including pokimane, HasanAbi, and Myth. Together, the politicians and gamers drew in 435,000 concurrent viewers during the over three-hour-long game’s peak—making it the third-highest peak on record—amassing a total of 4.5 million views.

This wasn’t AOC’s first time on the platform, as she previously appeared on Twitch for a streaming fundraiser last year. However, having since creating an account for Tuesday’s game, Ocasio-Cortez now boasts at least 545,000 followers—more than any other politician on Twitch.

But even more important than metrics was the message Ocasio-Cortez set out to deliver and her unprecedented way of reaching constituents. She and Omar directed viewers to IWillVote.com, a Democratic affiliated website that provides information to voters. “That’s really what tonight’s all about, and of course we are here to vote blue,” AOC said at one point during the broadcast.

Whether her message resonated with voters remains to be seen, but the tech-savvy move was certainly applauded on Twitter, as you can see from just a handful of the hundreds of enthusiastic tweets, below.

The kids, as they say, just may be alright after all! 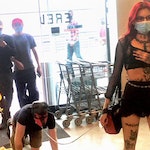 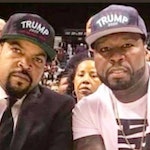