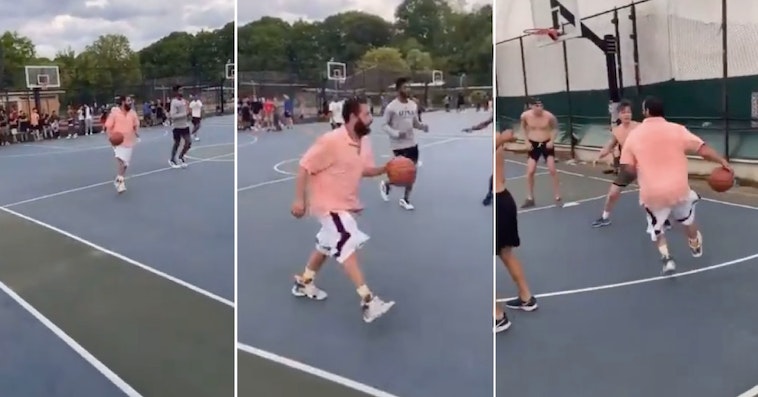 It really seems like Adam Sandler is exactly the kind of guy he usually gets cast as in comedy movies: a goofy bro. The comedy star could easily be in Malibu right now, sipping cocktails on a private beach, but instead, he is out on the basketball court somewhere on Long Island, playing pickup.

According to Front Office Sports reporter Anthony Puccio, he goes there every day to see if anyone will let him in a game. As if they wouldn’t.

Puccio tweeted two videos with Sandler in them, saying it was from a friend who sent him the footage. “He’s out here playing pick up everyday,” Puccio wrote.

Sandler stands out quite well in the clip because it kinda seems like everyone is shirtless except him. And what a shirt! Pale pink, with baggy shorts and some very stylish socks:

People love the clips, probably because they’ve fantasized about getting to shoot some hoops with their hero, whatever he’s wearing. In fact, some seem affronted that Sandler would be out there playing with “amateurs” instead of them.

A couple dared to criticize the man himself, saying he was traveling:

According to the New York Post, Sandler played against the NBA’s Kevin Garnett while filming the movie Uncut Gems.

“There’s a basket on the set,” Garnett said during an interview on The Jimmy Kimmel Show in 2019. “So when we would get done with these long days or in between takes, we would go out, shoot around.”

In that same interview, Sandler said, “It was a dream of mine to maybe, after work, show up at a park and play 2-on-2, and say, ‘Let me call my friend Kevin to play with me.’ It would have been amazing.”

Well, looks like there are plenty of other people willing to play, if not anyone who was ever on the Celtics. 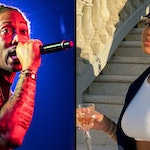 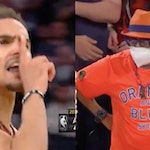